Home » Projects Funding » Riddle of the Sphinx: The Awakening

Riddle of the Sphinx: The Awakening

EXPLORE the Sphinx & Great Pyramid in this Epic Adventure Game, and SOLVE the Riddle of the Sphinx!

BACK THIS PROJECT UPGRADE YOUR REWARD

Explore the Great Pyramid and SOLVE the Riddle of the Sphinx!

After years of digging, noted archaeologist Sir Gil Blythe Geoffreys uncovers a secret chamber overlooked for centuries. Geoffreys’ first and only trip reveals an ancient, brittle papyrus scroll. After rough translation, he realizes he’s found the ‘Rosetta Stone’ of the Sphinx. Sealed with a thick resin, the scroll bears an indiscernible hieroglyph. Unfortunately, after breaking the scroll’s seal and deciphering it’s mysterious contents, Geoffreys realizes he’s unleashed an ancient curse; shrouding those who fail to heed its warning in certain death. Realizing he is doomed, Geoffreys sends for you, his closest friend and colleague.

Now, with the help of Gil’s carefully hidden notes and translation of the scroll, it’s up to you to solve the Riddle. However… the scroll has mysteriously disappeared. Your first responsibility will be to locate the missing scroll. Then, using the tattered scroll with Gil’s translation, you’ll be on the way to solving the Riddle of the Sphinx! 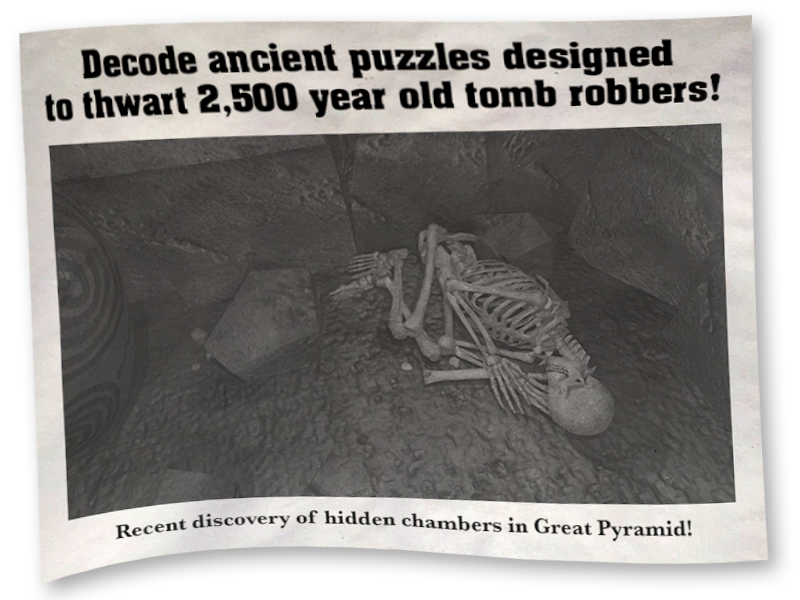 Resurrecting Riddle of the Sphinx

Riddle of the Sphinx™ was originally released in 2000 and quickly became a best-selling adventure game. The original team is resurrecting this epic Egyptian adventure with: 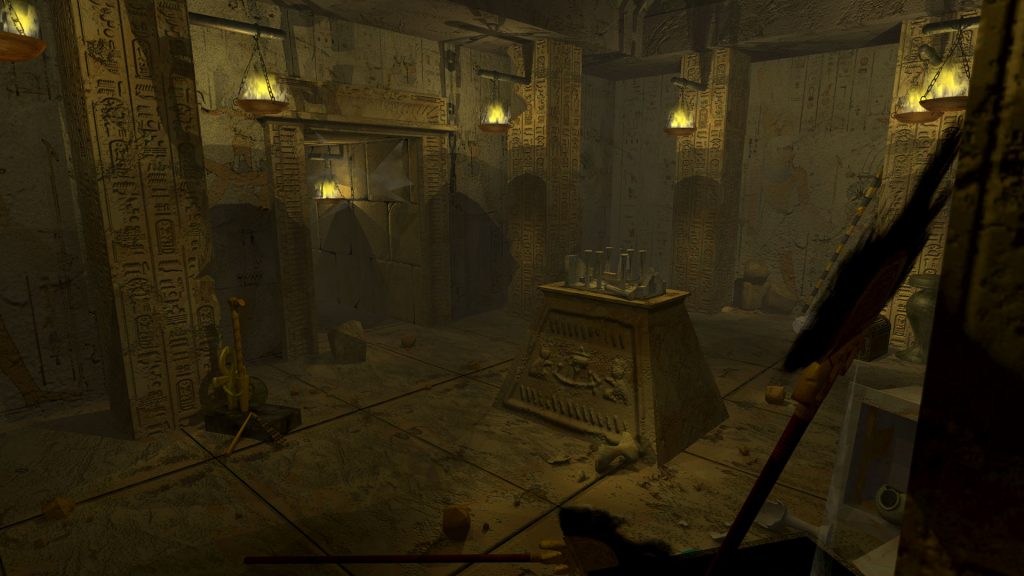 We are already converting the older models and enhancing the environments, and this enhanced HD release of the point and click original will open the way to a subsequent real-time 3D version. So, in a sense, your contribution to this project supports the birth of two archaeological adventure games. Furthermore, after these two releases, we have a new adventure planned in the Riddle of the Sphinx™ franchise.

What We Need & What You Get

We have some awesome rewards for each contribution level, some which have never been offered before! Best of all, not only will you be able to enjoy Riddle of the Sphinx; Awakening, but you support will make it possible for many others to become archaeologists solving the most enigmatic Egyptian mystery ever: the Riddle of the Sphinx!

More Than Just a Game

When we first created Riddle of the Sphinx, we had no idea the impact it would make on those who experienced it. We have testimonials of Father and Son bonding, young adventure gamers who kept a journal by their side, engaged couples playing remotely, home-bound gamers that were able to virtually walk, crawl, and climb through the Pyramid and discover a new world of intrigue and adventure!

Riddle of the Sphinx: The Awakening is:

Riddle of the Sphinx is Truly an Adventure of Megalithic Proportions

Riddle of the Sphinx: The Awakening is HUGE! It really just keeps opening up into more and more environments and an incredible amount of exploration. 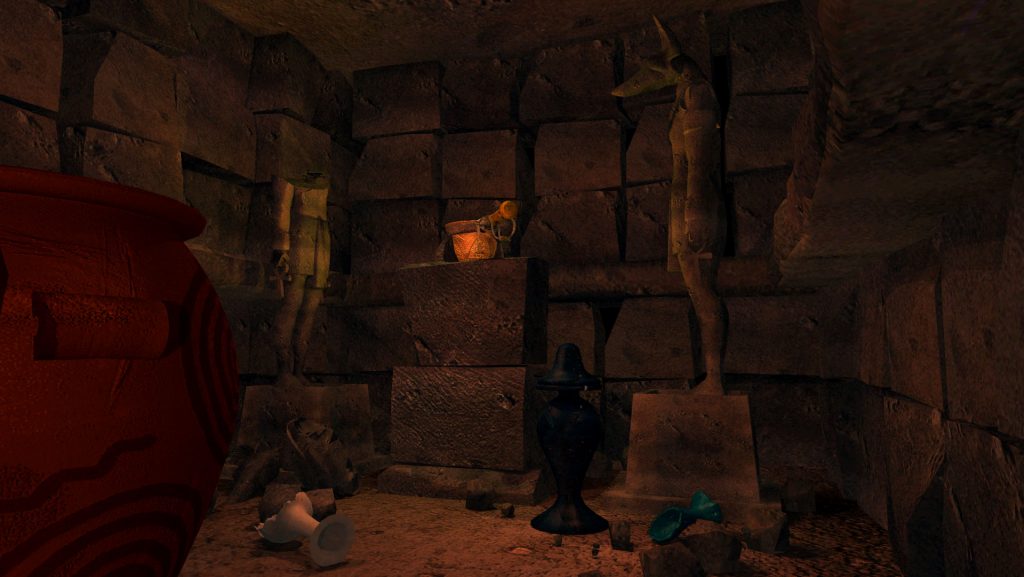 And the enhanced graphics of ROTS: The Awakening are much bigger, too. Look at the difference in size between the original 640×480 renderings vs the newly enhanced HD 1080p resolution. 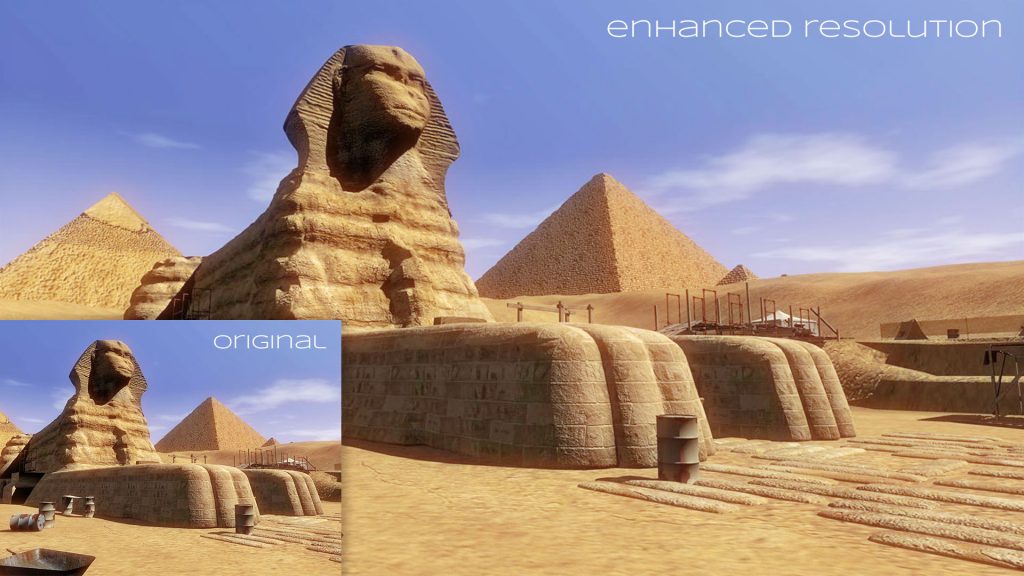 There are a number of challenges associated with re-creating a game that was originally released 18 years ago. One of the main challenges was taking the models from Strata Vision in Mac OS 9 (Yes, the original is really THAT old!) and converting it to Strata Design 3D CX 8. We are also reprogramming Riddle of the Sphinx: The Awakening from scratch to take advantage of Unity’s game engine. So… yeah, we have our work cut out for us. However, we feel the challenges we are facing today are very doable and nothing compared to what we faced when we developed the first game. Certain technological advances we take for granted now were once a pipe dream. If we could overcome the challenges then, as an indie game studio, we can surely overcome these obstacles now, with so much more experience under our collective belts 🙂 In fact, we have already surpassed one of the greatest hurdles: recovering and converting the original models. This process is not only valuable for bringing ROTS: The Awakening in HD to mobile, desktop, and AppleTV, but in ultimately bringing the models into Unity for the up coming real-time 3d version. Your support will help us overcome these obstacles and release a truly awe-inspiring adventure experience!

SPECIAL THANKS to Rand Miller at Cyan, makers of Myst, and Kevin Condie at Strata.

We were seriously stuck in opening some of the original models. While we had figured out how to run an emulated OS 9, and Strata’s 3d Blitz, we were missing some critical plugins. One quick email to Rand and within minutes, he found and delivered the missing plugin. Rand, THANK YOU for your help and inspiration through MYST! Then, when we got the old models opened in Blitz, and started to import them into Strata’s newest 3d software, Strata Design 3D CX 8, we ran into a host of new issues. We called up Ken Bringhurst, CEO of Strata, and Kevin Condie, software engineer. They both quickly helped us solve critical issues, and Kevin took a bunch of time to personally walk us through the solutions. Kevin and Ken, THANK YOU so much for making Riddle of the Sphinx: The Awakening a reality! Because of their help, the new renderings are using Strata Design CX’s Radiosity renderer, which features more compelling lighting, shadows!

Other Ways You Can Help

If you can’t contribute, but you want to support the making of Riddle of the Sphinx: Awakening, consider the following non-financial ways you can contribute to its success:

RESURRECT the Ancient Secrets of the Great Pyramid & Giza Sphinx in “Riddle of the Sphinx: Awakening” at https://riddleofthesphinx.com/fund

The FAQs are maintained on the official ROTS Awakening Kickstarter page: https://www.kickstarter.com/projects/jefftobler/riddle-of-the-sphinx-awakening-discover-lost-tombs/faqs

All comments are maintained on the official ROTS Awakening Kickstarter page: https://www.kickstarter.com/projects/jefftobler/riddle-of-the-sphinx-awakening-discover-lost-tombs/comments. If you backed ROTS Awakening on Old World Studios, after the Kickstarter campaign ended, you can submit a comment here and we will post your comment on the official Kickstarter page. NOTE: If you would like to join the conversations, check out our discussion forum tab (above) for fans and players of Riddle of the Sphinx: The Awakening!

All updates and announcements are maintained on the official ROTS Awakening Kickstarter page: https://www.kickstarter.com/projects/jefftobler/riddle-of-the-sphinx-awakening-discover-lost-tombs/updates

Whether you backed on Kickstarter or through our site, you can discuss Riddle of the Sphinx: The Awakening with all backers. 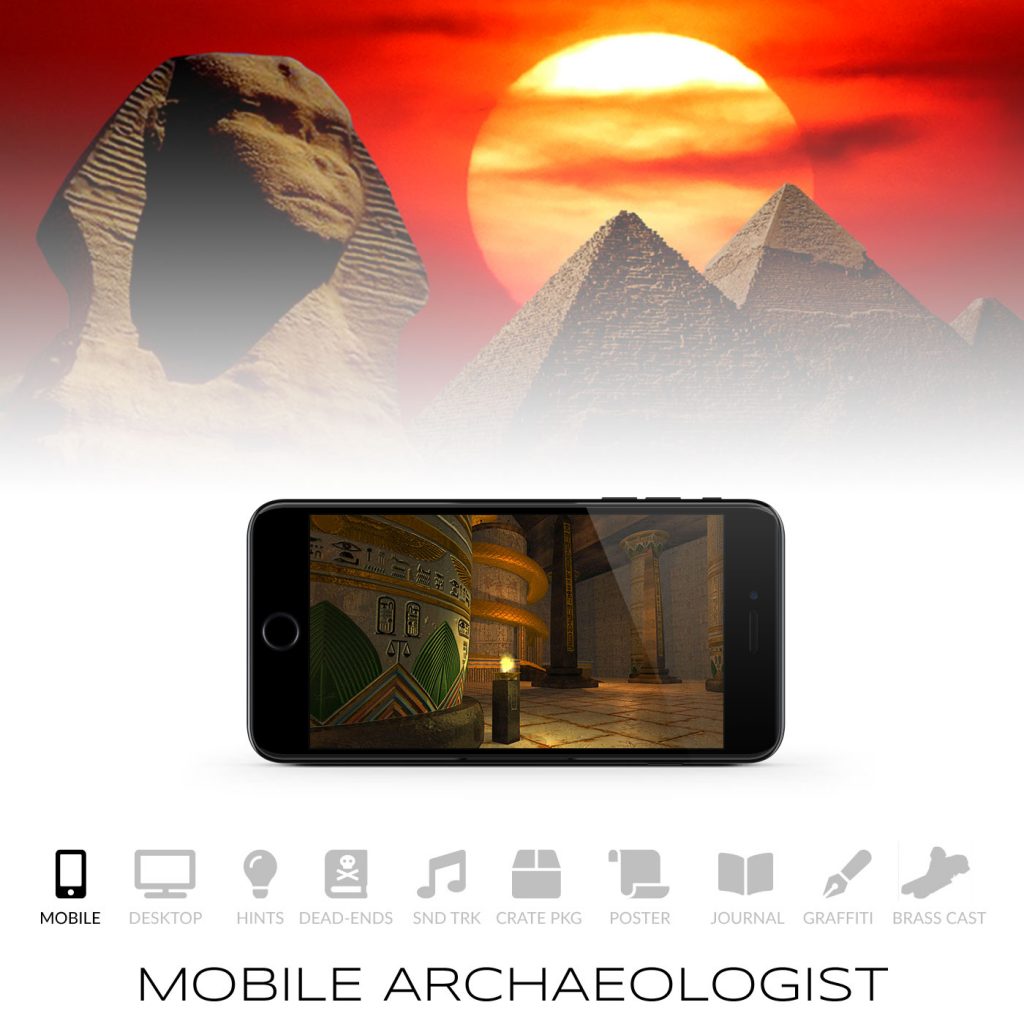 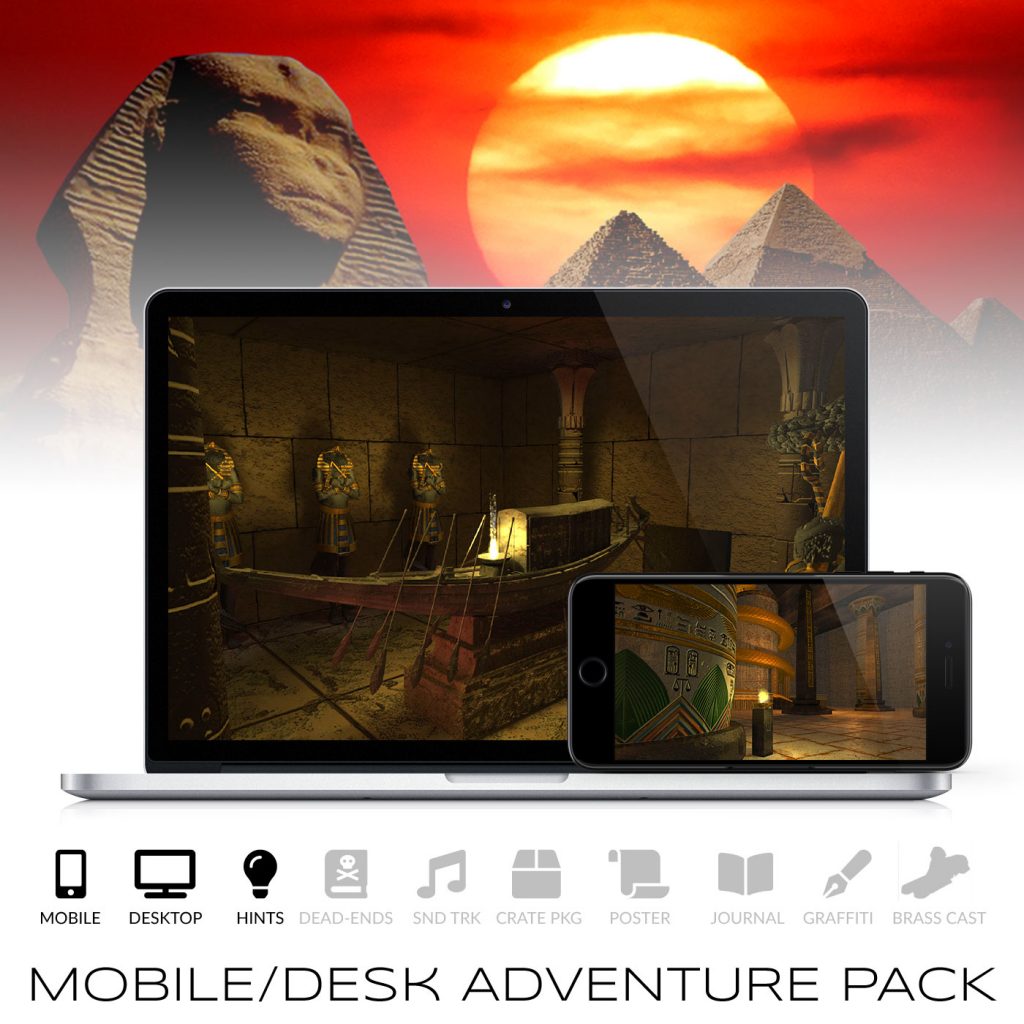 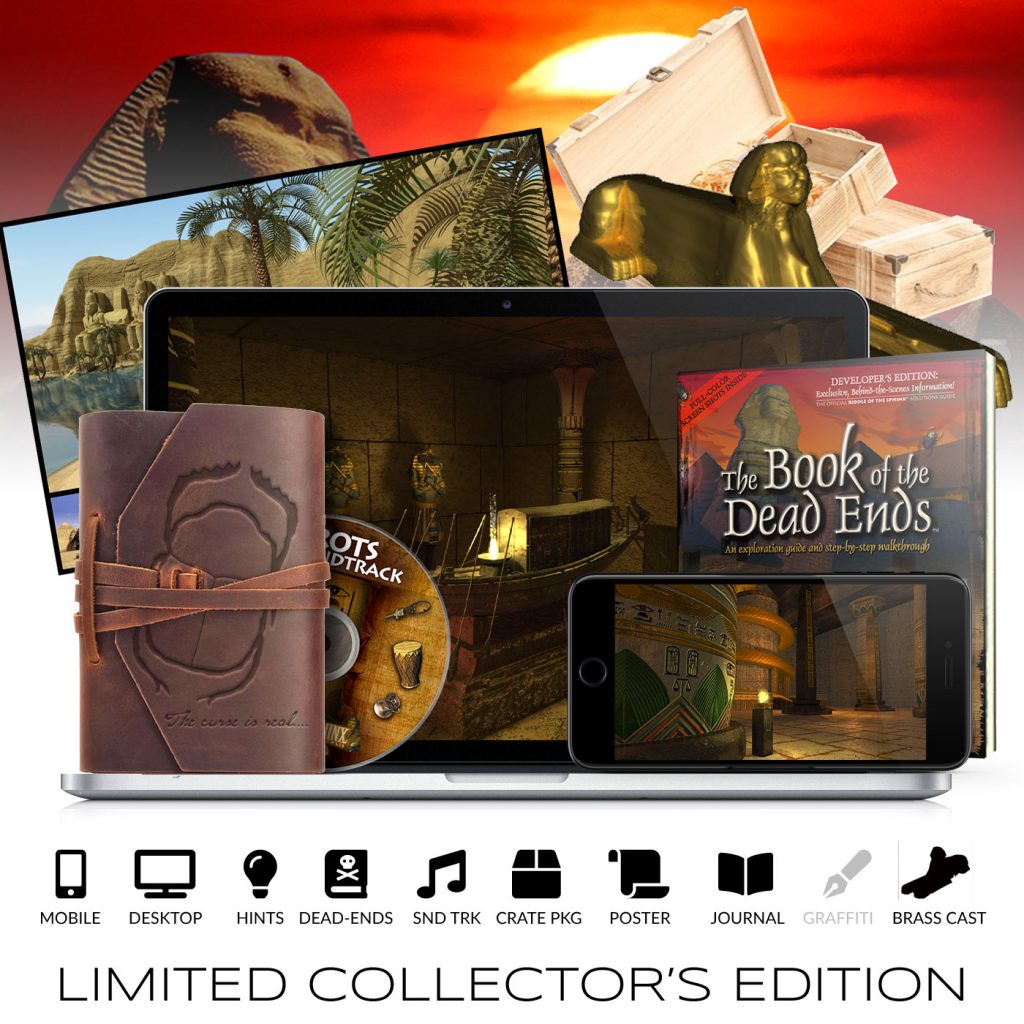 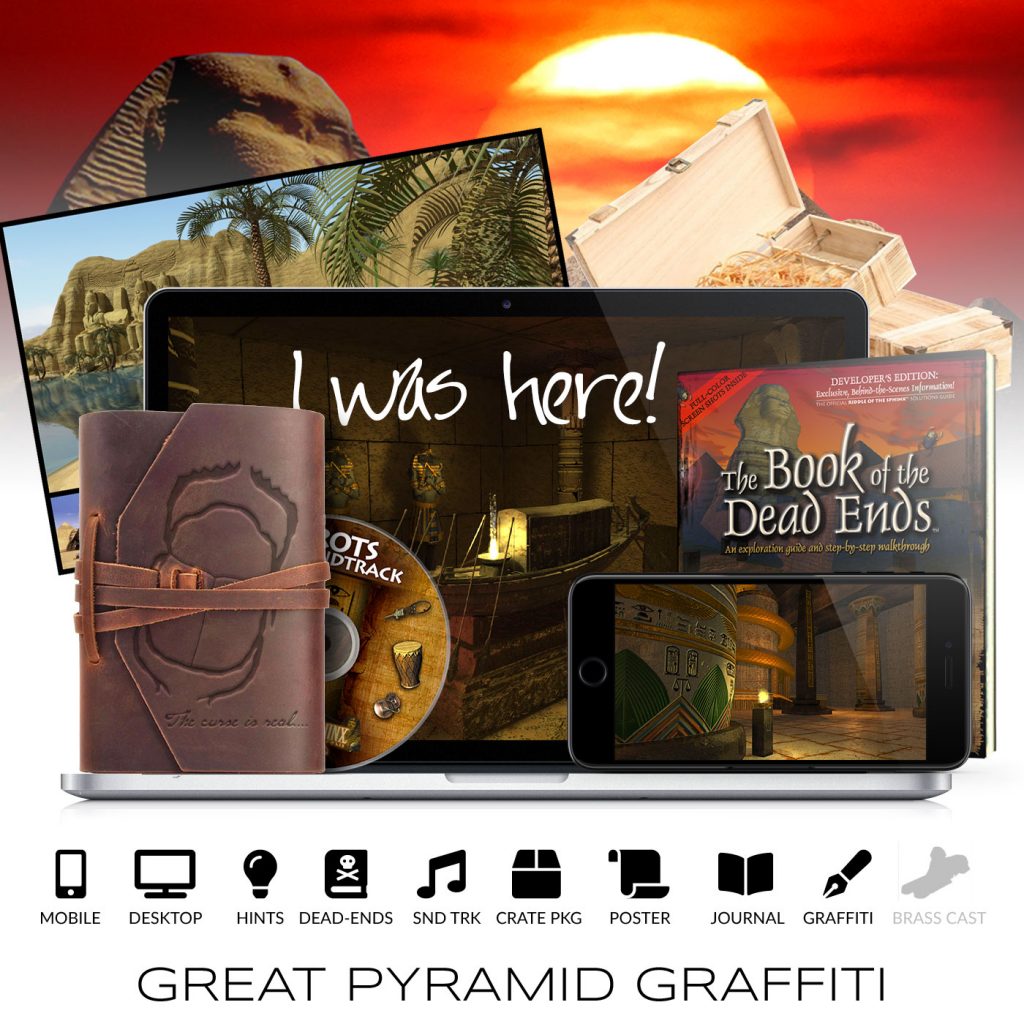 Leave your “mark” in the Great Pyramid like bygone explorers before you! We sanitized the Great Pyramid in the original, but now we are allowing you to make it more realistic with your own personalized “graffiti” inscription.
Includes:
Estimated delivery Sep 2018
Pledge
$200USD
“Limited” Collector’s Edition!

Everything in the Collector’s Edition PLUS a limited edition brass casting of the Giza Sphinx in the game, plus rare, early access to ROTS HD builds!
Includes:
Estimated delivery Sep 2018
Pledge

Old World Studios™ is known for creating award-winning graphically immersive adventure games, as well as other game genres. Our talented team of game developers created Riddle of the Sphinx™, The Omega Stone™: Riddle of the Sphinx Sequel, EMO's Adventure™, and we have several more games in the works.